Special issue: The Earth system at a global warming of 1.5°C and 2.0°C 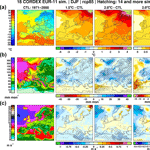 European climate change at global mean temperature increases of 1.5 and 2 °C above pre-industrial conditions as simulated by the EURO-CORDEX regional climate models

Abstract. We investigate European regional climate change for time periods when the global mean temperature has increased by 1.5 and 2 °C compared to pre-industrial conditions. Results are based on regional downscaling of transient climate change simulations for the 21st century with global climate models (GCMs) from the fifth-phase Coupled Model Intercomparison Project (CMIP5). We use an ensemble of EURO-CORDEX high-resolution regional climate model (RCM) simulations undertaken at a computational grid of 12.5 km horizontal resolution covering Europe. The ensemble consists of a range of RCMs that have been used for downscaling different GCMs under the RCP8.5 forcing scenario. The results indicate considerable near-surface warming already at the lower 1.5 °C of warming. Regional warming exceeds that of the global mean in most parts of Europe, being the strongest in the northernmost parts of Europe in winter and in the southernmost parts of Europe together with parts of Scandinavia in summer. Changes in precipitation, which are less robust than the ones in temperature, include increases in the north and decreases in the south with a borderline that migrates from a northerly position in summer to a southerly one in winter. Some of these changes are already seen at 1.5 °C of warming but are larger and more robust at 2 °C. Changes in near-surface wind speed are associated with a large spread among individual ensemble members at both warming levels. Relatively large areas over the North Atlantic and some parts of the continent show decreasing wind speed while some ocean areas in the far north show increasing wind speed. The changes in temperature, precipitation and wind speed are shown to be modified by changes in mean sea level pressure, indicating a strong relationship with the large-scale circulation and its internal variability on decade-long timescales. By comparing to a larger ensemble of CMIP5 GCMs we find that the RCMs can alter the results, leading either to attenuation or amplification of the climate change signal in the underlying GCMs. We find that the RCMs tend to produce less warming and more precipitation (or less drying) in many areas in both winter and summer.